Where are we today ?
Rock Glen resort Arkona Ontario


Well we had a busy day and a late night so, gonna have to post later in the morning, hope you can drop by. See ya then.

Ok now it's bright and early in the morning (5:30) had a good nights sleep and can play with this now.
Friday was a bit cooler  only about 23c but sunny most o the day. So after the morning coffees and walkabouts lets figure out what's on the agenda today. Head to the Arkona Market for a few things, its 9:30 and they are closed,  power outage.  Oh well, small towns in the country, this happens, we have had power outages for the last 3 nights but only for and hour or so. I checked back later and they finally opened just before noon.

We have our own wireless router in the coach for our computers and printer and works great for us the last 4 years. We have a only 5 GB of usage per month which is quite enough as long as we don't download a lot of stuff. And we thought our system was secure, with passwords letters and numbers. But somehow someone managed to hack into our network and rack up way more usage and increase our monthly bill big time. We do know when and where this happened, and it was a period of three days when downloads were happening during the night and were were sleeping, certainly not us. Well set out to do this and changed things, but I made a typo and ooppss... we can't even get on our system, now that's real secure. Try as I could not luck, hmm.... Get the book out, rest to factory defaults, manually ok got that done, its been over four years since we looked at this. Now we are secure, but now the wireless printer not working. Get that book out, hmm need to reinstall printer, got it done, secure, whew, that took up a few hours of our day.

Now lets get outside and read for a while and that we did. In the shade and almost felt cold compared to the hot days we were having.
The resort is getting busy, for this weekend is their 40th Anniversary open house with lotsa stuff going of. We have a nice quiet corner so can get as involved as we wish.
Later on Rich and Marylou stopped by to see if I could help setup their Shaw satellite dish. Shouldn't be a problem. Well if its gonna be a problem this was it. It was all tested and working when they bought is but not now?  Ok after couple hours I give up, lets have supper and sleep on it.

So fired up the grill for a couple awesome pickerel fillets (love pickerel ! and its been a while) and throw together a rice pilaf and oh soo good. 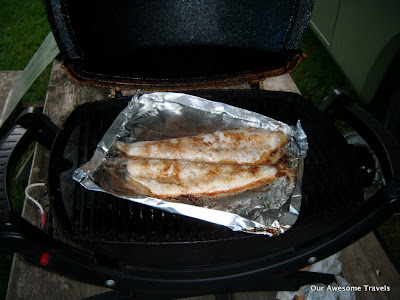 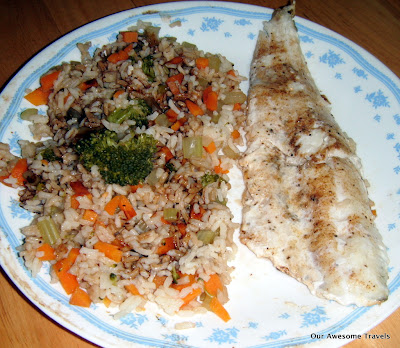 Now after supper another neighbour Phil is getting a fire going, his wife and a bunch went to play cards in the clubhouse. So we joined him by the fire, a little rain for a few minutes, then a nice colourful rainbow told us it was all over. 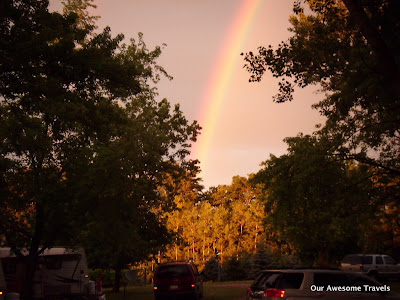 As we are sitting there his pesky resident squirrel scurries along the deck, down the stairs and climbs the pole right up into the bird feeder, hmm the nerve of this guy! 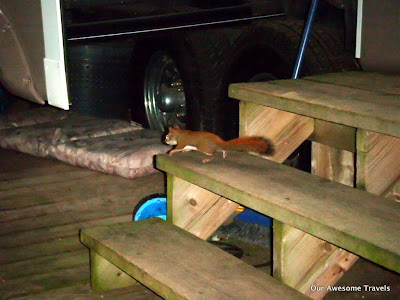 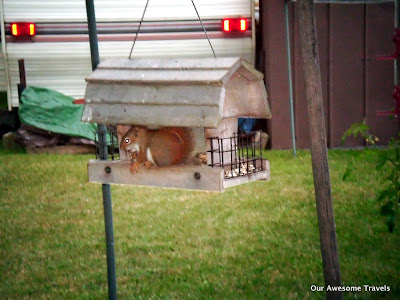 A wonderful night and nice fire, all the rest came back from cards shortly after 9 o'clock so not wanting to be rude we stayed here and chatted with the bunch until its way after ten. Way past my bedtime and much to tired to post, so now this morning I got her done with a nice bright sun shinning in our front window.

Thanks for dropping by again and if you are in the area drop by Rock Glen Resort for the open house 40th Anniversary Party, free hot dogs, pop and cake, Live enetertainment, prizes, give aways, wagon rides and a dance later on.
Check out the map below to see where we have been this summer
View Summer 2012 in a larger map
Posted by our awesome travels at 10:28 pm