In my last posting, I forgot to mention that I went to Grandson #4's hockey game. On his first shift on the ice, he got a breakaway on scored his first goal. He repeated a goal on his second shift. He ended up having 3 goals. His mom said in a Facebook message that she thought he was showing off to me. That could be, as it is the first game I have seen him play since October. But he is an awesome player. George was always taking pictures of his games. We were only able to see them in October and sometimes in April when we got back. We always made a point to see the games. This game was the first game that was during the day. All the other games were at night and I'm not fond of travelling at night.

This past Monday I went out to the RV. It was such a nice sunny day that I didn't want to miss out on being outside. I just couldn't stay in Stratford and not go outside. I started going through compartments. First to see what would stay and what would go. I was able to take some stuff out and store it in my brothers quonset hut to be dealt with later. Whatever is in the electric and wet bay are staying with the RV. I was able to through all the compartments on the driver's side. The only thing they need now is to be cleaned. On the passenger side I cleaned out one compartment. The balance will wait until good weather happens. One of the compartments has a tool box that there is no way I would even attempt to lift as I know it is heavy.

While at the RV, I also was inside and removed items that we didn't need when we moved into the apartment. So, the inside is almost empty and some of what remains, will also remain with the coach.

The last couple of days, I have been getting organized to do our taxes. They are basically ready to file except there is at least 1 piece of paper that I made need for Income Tax 2019. I get mail here at the apartment as well as the previous address. I'm not in a hurry to file the taxes as I want to make sure I have everything I need. In previous years, I didn't file our Income Taxes until mid April anyway.

I have been waiting for the following to be completed. I found the original picture that appears on the blog and had it printed. I then went to Michael's to have them frame it in a frame I got inexpensively. It took 2 weeks for to get a mat and be then framed.

Now it just needs to go up on the wall.

A comment was made on the blog about me buying something smaller that I could handle. Unfortunately, at this point my RV'ing days are over. I'm not sure I would be comfortable travelling by myself, keeping 2 vehicles and setting up a smaller RV even though George taught how to do everything with the RV. I believe he knew that I wouldn't be RV'ing anymore. But that doesn't mean that I won't travel. That day will come. For now, I know I can always go to Rock Glen Family Resort and rent a cabin. That is the my current plan.

Also a comment about a sewing machine. My mother taught my sister and myself to sew. We always had a sewing machine at home. I was never as good as my mother but I did learn the basics. A sewing machine might come in handy but for now I think I will just borrow my sister-in-laws. I actually saw a small one at Value Village here in town that I almost bought. But, I decide to leave it as I don't have any sewing projects in mind and I would also have to find a place for it.

So far, my cooking disaster hasn't been repeated. Today, I started a beef roast in the original slow cooker. I've been smelling it all day and it is up to temperature. Good thing for Google to let me know what things should be cooked to. As I was writing this my potatoes boiled over and made a slight mess of the glass top. Crap, something to clean. I guess I can also do work make projects.

Thanks for all you comments in the previous blogs.

Want to learn more about Membership camping at Rock Glen Family Resort ? click this link www.geosuzie.rockglen.com to book a tour
Posted by our awesome travels at 7:04 pm 18 comments:

Not exactly sure what I have been doing but I do something everyday.

The other Friday, I throw out supper. I had put a chicken breast in the new slow cooker in the morning with a cream soup (I did this previously in the bigger cooker). But it never got up to temperature of 165 F, according to the internet. I heated up frozen vegetables, fried some potatoes and put that together. I checked the chicken, it still didn't look right, so I added chicken chunks to the fry pan. I attempted to eat what I made, but I didn't trust the chicken, so in the garbage it went. Hate throwing out food, but I wasn't taking the chance on food poisoning. Not sure if it was the slow cooker or the chicken, since the soup was current. That was my first disaster in making a meal. I've been really good at cooking my own meals without using Skip The Dishes. A hot dog was then what I could do quickly.

We had an accumulation of snow the last weekend in February. I had planned for this and got what I needed regarding groceries so I didn't have to travel. I took a couple of pictures of the result. I thought it was rather cool as we had a west wind and looking closely, the drivers side had an area that reminded me of someone surfing, with the way the curve of the snow was. When it stopped, I cleaned the car off. I wanted to avoid having to scrape the windows and the sun did melt the snow remaining on the car. 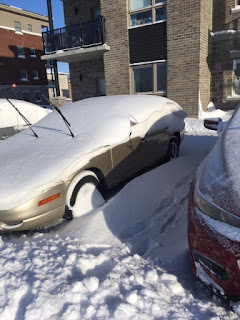 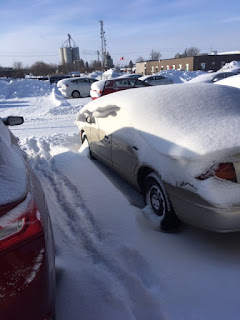 This past Monday, I planned on putting ties in the duvet cover. When I bought the cover back in October, the cover did not come with ties. The ties help to keep the duvet in place. Over the last couple of weeks I found material (an apron that George used in the restaurant) and cut it up to use for ties. My sister-in-law brought me a portable sewing machine. I started the process of getting the ties sewed into the cover, except the bobbin ran out of thread. Now, I haven't sewn in years and it was a machine I wasn't familiar with. So, to fix this, I packed up the sewing machine, duvet and duvet cover and went to my sister-in-laws. Success, ties sewn in the duvet cover and tied.

I have been working on a list of repairs done on the RV since 2006, sorting through manuals etc to go with the RV and listing some things I know that I will sell. Yes, the RV will be sold. I just need now to take a look at what is in it and decide from there. George knew that I won't keep the RV. Hooking up the car to the RV is beyond my capabilities. He also knew that I would have to create a new life for myself. What a smart man. My brother made a comment a while ago that he thought the RV was empty. Fat chance. I told him, only the top half is empty. He was a tad surprised at that.

I purchased Command hooks that are meant to be used to hang brooms etc. They have been in the corner of the front closet and often times fall, which is a nuisance. Therefore, the hooks. Now, they stay in place and are easily removed. 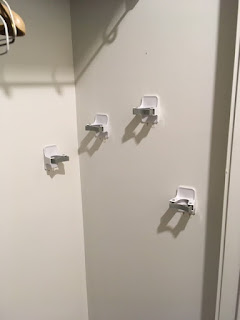 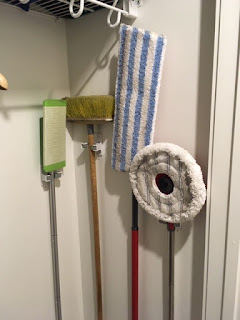 The other day I saw the garbage truck pick up the garbage. I have seen them before but I was able to take pictures of the process. When we first moved here, I wondered how the garbage and recycle was picked up. What a cool process.


During the process, the operator loosened the ties, then when the bag was over the truck, pulled and the bag opened. The garbage was now in the truck. I found the process very cool.

Today was a Spring like day (50 F, 10 C). The forecast for the next 14 days, we will have above freezing temperatures. Wonderful. Will see if that happens. Hopefully it does, because I would like to get out to the RV and take a good look at the compartments. See what to keep and what to sell. Of course making a note of everything.

Want to learn more about Membership camping at Rock Glen Family Resort ? click this link www.geosuzie.rockglen.com to book a tour
Posted by our awesome travels at 6:13 pm 19 comments: