This past weekend, I was at a Hockey Tournament in the Halton Hills area with my #4 grandson. The weather was conductive for me to go, as snow was NOT in the forecast. Driving back and forth would be about 1 hour and a half. So I made the decision to stay at Homewood Suites by Hilton Toronto-Mississauga and I invited my grandson to join me, especially since he doesn't like the travel time involved.
The following was the schedule for the weekend:
Friday at 12:00 game in Milton against London Junior Mustangs, we won 2-1
- Lunch at East Side Mario's
- We checked into the hotel with a road trip. I missed the cutoff on the 401 so we took a scenic tour. Went to the next exit and turned around to get the correct one. There was a family from London who were also staying at the same hotel, who also took the same scenic tour.
- Game at 7:30 in Georgetown against Hespeler Shamrocks, we won 4-3
- Supper
Saturday at 10:30 in Georgetown against Kanata Blazers, we won 5-1
- Lunch at Angels Restaurant
- Entertainment for the boys at GlowZone 360, where the boys were able to enjoy 18 holes of glow in the dark mini golf, Laser Tag and $5 of a game card.
Game at 6:45 in Acton against Glancaster Bombers, we lost 2-1. This game as also delayed by an hour. On to the finals.
- Supper
Sunday at 11:35 in Georgetown against Woolwich Wildcats, we won 5-2
- A bunch of us watch the end of the game between Leitrim Hawks from Ottawa against the Burlington Eagles. That game started at 11:50 and we wanted to see what we were up against. At the end of their 3rd period is was tie. They then play 4 on 4 for 3 minutes, no goal, 3 on 3 for 3 minutes, no goal, finally 2 on 2 and the Leitrim Hawks won.
- Lunch at Kelsey's
- Final game at 4:40 against Leitrim Hawks
This video is my grandson with another player patting the players backs as they get on the ice, wishing them good luck and have a good game.
Championship game. At the end of the first 1-0 for the Huskies which my grandson scored. In the second 2-0, 2-1, 2-2 at the end of the second. In the third about 5:25 2-3 for Leitrim Hawks. About a minute later is was a tied game which ended the 3rd period. Now into overtime. 4 on 4, still tied and finally 3 on 3. 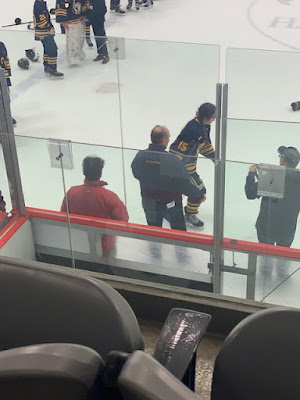 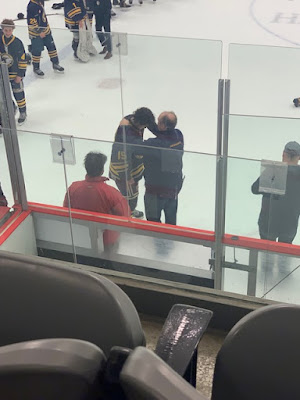 Above 2 pictures, are my grandson receiving his medal.

Holding the cup with another player. 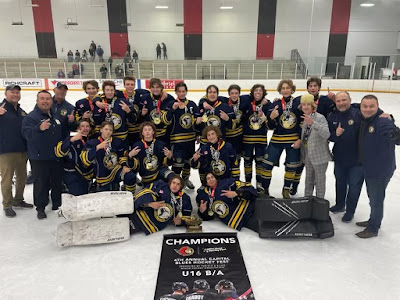 Team photo.
This last game was a nail bitter, which I didn't do. Back and forth on the ice with many chances for both teams.
My grandson was given the option of travelling back with me or his Dad. He choose me. His reasoning was that my car is more comfortable than his Dad's truck. This gave me extra quality time with my grandson.
New Hamburg Huskies played very well over the weekend. Between the hotel and arenas, it was about a 30 minute drive. He needed to be at the arena an hour prior to the game.
This was the first road trip I did on Hwy 401. I wasn't able to use the cruise as there was construction and traffic. Totally ignored the speed limit and just followed the flow of traffic. Needless to say, I was maybe 10 kilometers over the speed limit at any given time. The Honda Civic was a pleasure to drive with great pick up when needed.

I have been going to his home games on Thursday nights and quite a few of his home games. For the next couple of months, the weather will determine whether I go to a game or not. I don't like driving in a snow storm. It has been amazing to watch how the team has improved since their first game in St. Mary's in early October. They have a great coaching staff who treat them with respect and get respect back.
Over the season so far, I have met a lot of parents and of course they know that I am, #15 on the team is my grandson.
It was an awesome weekend to spend quality time with my grandson. I thoroughly enjoyed it and I think my grandson did as well. Maybe we will do it again. You never know.
Where are we today? Want to learn more about Membership camping at Rock Glen Family Resort ? click this link www.geosuzie.rockglen.com to book a tour
Posted by our awesome travels at 2:12 pm 33 comments:

Back in May I took the Saturn into my garage in Tavistock as the A/C wasn't working very well. The garage did a temporary fix. To fix it properly, I need $1,700 worth of repair if they can find the part. Unfortunately, the part was not available in Ontario and had to come from the United States which would make the repair much more expensive. I have found that parts for the Saturn are hard to find for a 20 year old car.
Over the last couple of years, I have been researching for a new car. Now with the bill to fix the A/C the decision was made.
I have always liked the Honda Civic Sedan. So off to Woodstock I went to see what they had or I could get. Stratford Honda didn't seem very interested in helping me get a new car. Woodstock Honda had 4 on order to arrive at their location early August.  On May 21st, I signed the paperwork for a Honda Civic Sedan EX. The price and interest rate were guaranteed. I then just needed to wait. Some people who know me, know that I'm not always very patient.
I went to Rock Glen for the Canadian July long weekend and on the drive my A/C totally quit. With having wind up windows, I needed to make a stop to open a couple of windows to try and stay cool. Not very successful. I was out of the park by 9 am to get back home before the it got really hot.
Finally on Friday, August 19th, I was able to pick up the Honda. What a joy it was to have A/C. I will have a huge learning curve as there are so many features that I didn't have in the Saturn. 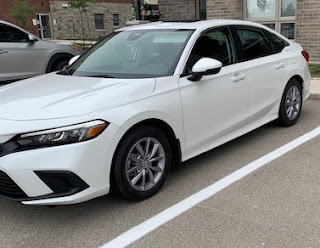 After getting the Honda, I went home and packed up the car to go to Rock Glen for the weekend. I was told that George was going to presented with an award and they wanted me to be there to accept it.
Rock Glen had their 50th Anniversary celebration on Saturday. There were a lot of awards given to people as appreciation to what they do for the park and to various members. Kristy presented me with the Best News award as George was always promoting the park. She also said that he was famous for his tie dye shirts. 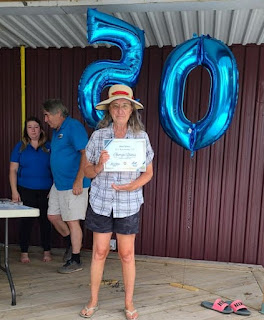 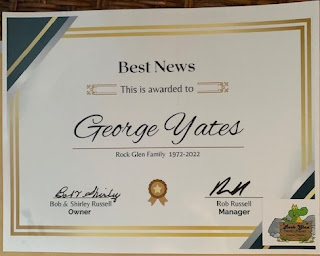 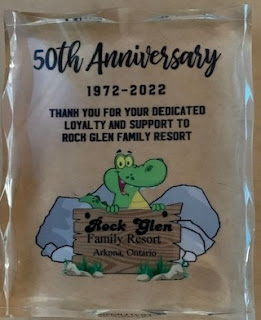 They also had certificates for the loyal campers. The certificates were given out for every 10 year duration, starting with 1972. We joined Rock Glen in 2006. We always enjoyed our stay and the membership. 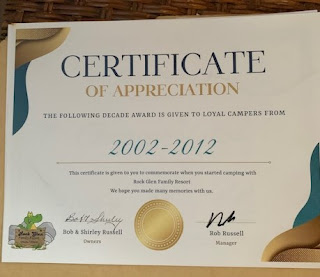 It was a great weekend. A lot of people were involved with this special occasion for Rock Glen. Thanks to all of you who put this celebration together.
The Honda is a pleasure to drive. I had no issues to or from Rock Glen. Now I start the process of learning more about the features that I have. I have even started looking through the manual.
Thanking everyone in advance for your comments.
Posted by Suzie at 10:06 am 28 comments:

Yesterday, we had a family get together on the family farm.
My great grandparents Peter & Mary Roth purchased the second farm about 1914 when their eldest son Sidney decided he wasn't going to high school. Sidney stayed on the first farm for many years. Peter, Mary and their children worked the second farm. Peter died in 1918, so Arthur my grandfather worked the farm with his mother.
Arthur married Malinda in 1933 and they had 2 girls. Arthur purchased the farm from his mother in 1935. My mom, Beatrice was one of the girls and married my father Levi Kuepfer in 1956. They lived at various locations while growing a family of 3, 2 girls and 1 boy. In 1962, Arthur had several heart attacks and could no longer work the farm. My Mom & Dad then moved to what we call the home farm. We all lived in the same house. Grandma, grandpa, Mom, Dad and the 3 children. It was great to be able see our grand parents every day.
In 1968, Grandma & grandpa moved off the farm into a new house in New Hamburg. Unfortunately, grandpa was not able to enjoy living in town for long, as he passed away a month after moving in.
Needless to say, my mother and father took possession of the farm. It has continued on in the family to my brother and now to his son, Greg. It has been in the family for over 100 years.
The main reason for our get together, is that Greg and his wife have built a new dairy barn and the family wanted to see how the operation all worked. The get together was with the Kuepfer family and my Aunt's family, (mom's sister). There have been many family get celebrations over the years on the farm, including my 50th Birthday party and George & I retirement party in 2006.
This is a picture of the farm in 1962. 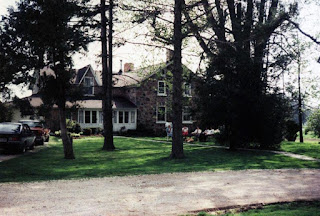 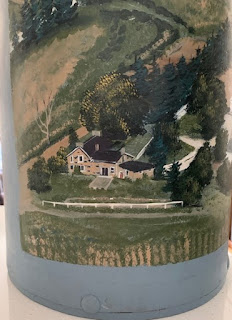 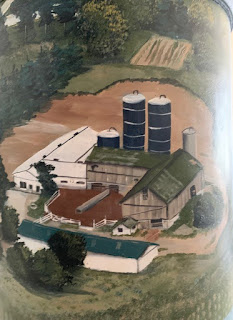 In 1982 Dad & my brother added a dairy barn to milk 50 cows.
From the above picture, Greg had the original barn board barn taken down and started the extension in 2020. Unfortunately, I don't have a picture of the new barn but imagine an addition about a foot ball field long replacing the old barn. Greg now has more room to increase his herd.
For this occasion, Greg also planted 2 trees. One for my grandparents and the other for my parents. The following is the plaque that is at the trees. 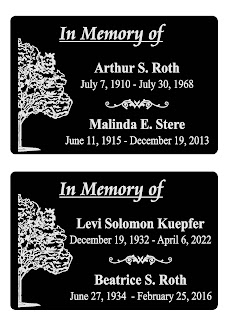 The following is a picture of all in attendance. 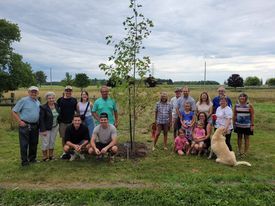 It was great to see everyone who could attend. This farm will always have a special place in my heart.
Posted by our awesome travels at 1:20 pm 22 comments: 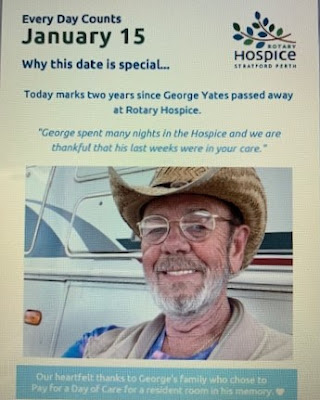 Two years ago this morning, I lost my husband and best friend.
I will always appreciate that Kim, Ken and Jessie were with me at the time of passing. He will always be in our hearts as he was a very special man. He is watching over us making sure that we live our life to the fullest. He installed in everyone he met his positive attitude.
Miss you every day.
Posted by our awesome travels at 9:58 am 26 comments: