Thanks for joining us on our journey of North America
in our Holiday Rambler, since August 2006

Where are we today ?
New Hamburg Ontario

Woke up this morning after a good nights sleep and able to see a bit of sunrise, but kinda overcast and too cold and windy. Dennis was not here for his coffee, he was away at a conference. So we drank most of it ourselves, computing, chatting and watching the morning news.

Then I took a trip to Plattsville to check out the hardware store for a few things and chat with Len for a bit. Too cold and windy out there for any walkabouts today, even a few snow flurries in the air! Think we need to head back south for a couple weeks yet.

But I had a project today finish off the ham and bean soup. Skim the broth, I made yesterday and had put in the fridge, add a bunch of veggies, spices and beans then simmer for a a couple hours. The aroma just goes thru the whole house, perfect weather for a big pot of soup. While waiting for this, I took a large bowl of trimmings and made some ham salad for sandwiches. Even Omer got the huge ham bone to gnaw on. I swear I could see a smile on his face as he thoroughly enjoyed it. Then I think he hid some for a snack later on. Boy we sure got a lot of mileage from that ham, feeding 27 people two meals on sunday and then, leftovers sandwiches and a huge pot of soup.

By now its afternoon already so a quick trip to town for a few things, back home to compute for a while. Much too cold and windy to play much outside so compute for a while and research a bit  until time to whip up a tasty supper tonight. We can eat earlier as Dennis is still away and Sandy is waiting for their first grandchild (any minute now) so I made up some fettuccine alfredo with a chicken breast, tossed salad and a bun.
While we were eating Omer was very content to relax on the kitchen floor after chewing on his ham bone for a while. He does not get to spend a lot of time in the house, being a farm dog, he actually finds it too hot. 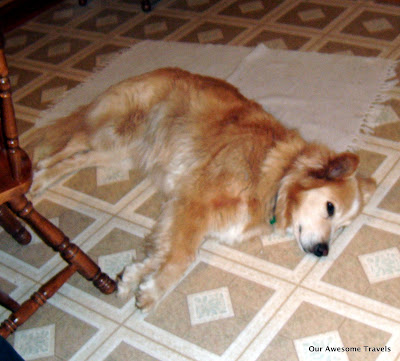 Now supper done and we head home.They have had to tie up Omer in the garage at night for the last couple of years as he has a tendency to like to wander and play with his buddies. Racoons, stay dogs, coyotes, ground hogs, even skunks you never know where he will be. He has even stopped by some neighborhood farms to bring back a shoe, boot, glove or even a piece of hockey equipment. Not fun when he comes home skunky or has been in the muddy creek all night covered with burrs.
But he is great guard dog, barks like crazy when anybody comes around, you sure can't sneak in here. Its rare that a good farm dog can be a great family pet too. And he is ten or eleven years old not to shabby.

Ok we made it thru a cold Ontario day and it does promise to get warmer in the near future. Not soon enough for us thou. Think we can now snuggle in for the night with maybe a movie and good nights sleep.

Check out the map below to see where we have been this summer
View Summer 2012 in a larger map
Posted by our awesome travels at 11:30 pm