Where are we today ?
Plattsville Ontario
Cool night again, great for sleeping and another nice sunrise this morning. At the garage for 8 am to get the rear tires on the car balanced (getting new front tires soon). Picked up some groceries in New Hamburg, then into Kitchener and Waterloo to run a few errands. Got an anti-virus program for Suzie's Pc at Staples then stopped at the Apple store in Waterloo to get a new battery for my Macbook Pro. Its over 5 years old, working great but the battery needs replacing.
Very busy here but the service is very efficient. Waited a few minutes, had my Mac Book checked out was given a quote and pick up time less than two hours. Just enough time to make a few more stops in town. Get Ma over to pick up her car that has now been repaired, new brake lines and front end parts. Her internet is now working, but a slight issue with her email, will work on that tomorrow, still have things to do.
Picked up my Mac, good as new, then back home shortly after 3:30. Dogs here waiting for Suzie to get out for a run.                While she was doing this I fired up our Weber Q and grilled a fresh Turkey Breast, cauliflower in foil and some yellow pepper pieces.
Added that to another tasty salad and we had an early supper. Lotsa leftover turkey for sandwiches and maybe even a couple bowls of soup, when I have time.
Supper done then to the Arena in town shortly after 5 o'clock. Grandson number one has another tryout that placed him on the house league. 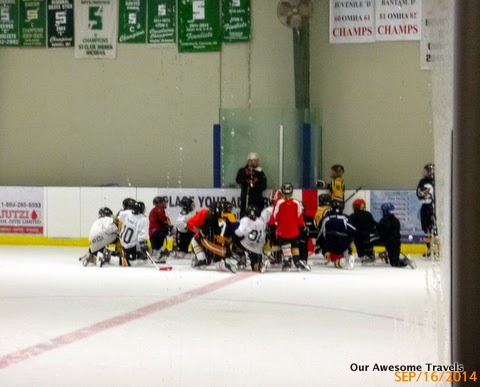 Then from 7 till 8 grandson number four has his first exhibition game. They played quite well but were defeated 3 to1. Pretty good hockey for these little guys. 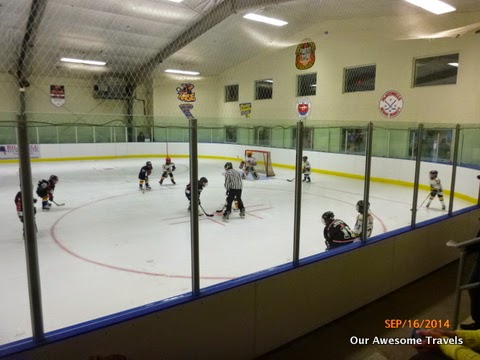 After three hours in the arena and some great hockey, time to head home, post this blog and call it a night. Tomorrow run into Waterloo again, and put a few more things together.
Thanks for taking a peek again and hope you had a wonderful day too.
Posted by George, a.k.a. "The Weber "Q" Man of Blogland" according to Rick Doyle.
Check out the map below to see where we have been this Summer.
View Summer 2014 in a larger map
Posted by our awesome travels at 9:02 pm