Where are we today ?
Rock Glen Resort Arkona Ontario
clic on a pic to enlarge it
I was up early this morning and finished off Saturday's blog posting first thing. Got home too late after the party to even think about it. We just had too much fun.
First walkabout today was very nice and quiet about 7 am, by the pond and watch the fish and the lily pad flowers, yellow flowers in one pond, pink in the other? No sign of the 2 geese families though, maybe they flew the coop? 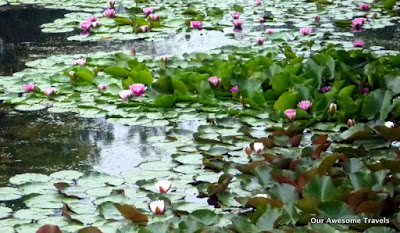 I did a few early morning walkabouts and chatted with a some of the people we met at last nights party. Everyone had camped here. And heard some of the younger ones were at it until 3am! I used to do that many, many years ago, but this getting older kinda slows us down a bit (maybe a lot).
Then another walkabout with Suzie before we got to chat a bit more and say goodbye to most that were leaving today. They wanted to get packed up early, a major storm front was heading this way. And Rob from the park was whipping around on his golf cart advising people to roll up their awnings.
We had weird weather today. Right around 12 noon the skies darkened, winds picked up major and heavy rain came down, for about 15 minutes.
By 1 the skies cleared and wind died down, but then at 2 the rain and wind came again.
So we were inside then outside off and on . By 5 o'clock again the sun was shining so fired up our Weber Q to pan fry some fish  and grill some asparagus. 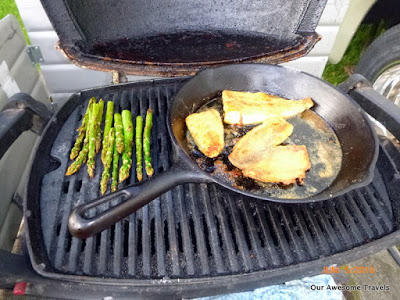 By the time we were finished, clouds were back as well as the wind, and again we have a severe weather warning. Rain and wind.
Ok it's 7:30 let's just head in for the night, read a bit and maybe a movie on the tube. All in all was a pretty nice day, as long as I can wear shorts and t-shirts it is awesome.
Thanks for stopping in again and hope you had half decent weather as well.
When we head south Countdown
Check out the interactive map below to see where we have been this summer
Posted by our awesome travels at 7:32 pm