Monday,
Today was not an overall good day for Geo. The transport to London was difficult for him as he was on a stretcher and going over bumpy roads. Very tiring for him.
We are going to try for radiation treatment in London, if a bed can be arranged at Victoria Hospital for his treatment.  The radiation is done over 10 days Monday to Friday. Not sure about the weekends but we will see. I plan to talk to London about arranging for Geo to spend the time at Victoria if a bed is available. I was told it would be 2 weeks before radiation would start. From the discussion, chemotherapy would have more side effects. I don’t think that chemo is going to be an option because he is too weak.
Tuesday,
His #1 daughter was with me today when we had a discussion with the doctor about several things. He was able to answer her questions and concerns about her Dad.
Discharging him from the hospital is not an option at the moment and they are in no hurry. The doctor has ordered palliative physio to get him stronger. Spending time in bed is making him weak. At the moment we are focused on pain control, then eating and then mobility. The doctor has ordered a SubQ (under the skin type IV for pain delivery. This will give him a constant low dose of pain med and Geo can ask for extra when needed. This will be easier on him as the med can be administered without waking him up.
He did try to work on the computer but couldn’t focus.
At the moment he not liking solid food. He had chocolate ice cream for lunch and vanilla for supper. Preferred vanilla. He gets full very quickly and we think it is because of the accumulation of fluid in his abdomen.
Wednesday,
His abdomen has fluid and was drained it today. At one point we thought it was done previously, which was not the case. Yesterday we thought that might explain why he had no pain from Oct 11th to 22nd. This drain was done at his bedside. For him, it was painful as he hates needles, even having blood taken he jumps, so we warn everyone when a needle is involved. He was tired after the procedure.
His #2 daughter and #3 grand-daughter came for a visit today. #3 grand-daughter recently had a birthday. She opened her birthday card which really pleased Geo. At one point #3 grand-daughter bought several things for herself from her birthday money. She had to show her grandfather. He was so pleased by this. When they were getting ready to leave, I lifted her up to say goodbye. I am so pleased that her mother sent me the photo below. 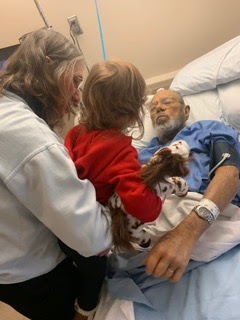 We had a visit from the minister of the church I attended during my childhood and teenage years. She is also a cousin. Her grandfather and my grandfather were brothers. During our younger years the 2 families got together regularly, especially over Christmas. I have a lot of great memories of those years. My sister and brother-in-law also visited. They have been away for about 2 weeks and it was great to see them again.

He was very alert for these visits. I believe the adjustment in his pain med has contributed to his alertness.
Last night for the first time, I used a service called Skip The Dishes here in Stratford. What an awesome program. I ordered my supper from Boston Pizza. I could track where the delivery person was and knew when it was going to be delivered. At night, when I get home, I have not been prepared to make something for myself. This has given me 3 nights of supper. Makes it so easy for me.
I want to thank you all for your prayers, best wishes and our families. It is greatly appreciated for the support you have given us.
I am calling it a night. It is time for me to get a good night’s sleep. I actually set my alarm to make sure I’m up the following day.
As usual, One Day At A Time.
Posted by our awesome travels at 9:09 pm