The weather came as predicted, so we hunker down and make the best of it. And take a few minutes to back up my Blog.

Where are we today ?
New Hamburg Ontario
clic a pic to enlarge it
Rained off and on overnight and was 38F at 5 am. Overcast and cloudy all day as the temperature is dropping. So this morning I started a large pot of Hurst's Ham Been soup about 8 am boiling with the hambone from last nights supper. A good day for homemade soup.

While this was simmering away I whipped in to New Hamburg for a few items, before the freezing rain starts. And I guess everyone else thought the same. The large No Frills grocery store there at 8:30 this morning, almost every cashier open and 3-4 overfull carts at each one, and everyone talking about the ice storm coming. It took a while but I was in no hurry.
Back home by 10 to finish off the soup and decided while I was in the kitchen anyway may as well bake a package of cinnamon rolls to nibble on and share, quite tasty they were. We enjoyed a bowl of soup for lunch and a tasty warm cinnamon bun, then home for the afternoon.

I picked up these to try when we were in Ohio and made a very tasty snack for a very good price. 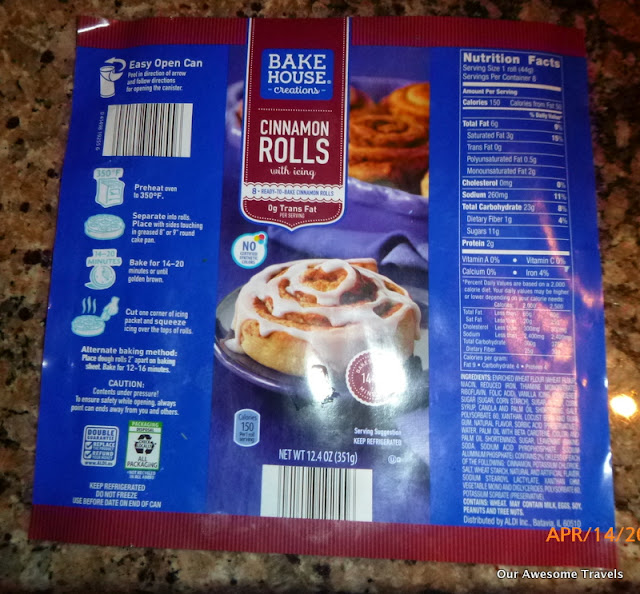 By 11 am the freezing rain had begun and while looking out the Kitchen window Suzie and Dennis saw a  large tree branch fall onto the roof of one of their sheds. Their clothes line is attached to that tree as well so they whipped outside to take the clothes line down , at least no laundry on it.
Now because of the freezing rain, sleet and 25 mph winds hitting the drivers side of our coach we decided to pull in the slide, this makes our coach warmer, less drafts around the open slide, and helps to prevent the freezing of the water lines that go out there for our kitchen. The temperature around -3 C (26F) with a wind chill -11 C (12F) not nice out there, no problem we are toasty inside.
Soon time for supper, so I preheat the oven (for extra heat)  and baked a couple of chicken cordon Blue that I picked up in Ohio. Simple, easy and tasty, to go with our salad tonight.
The chicken done in the oven for about 40 minutes and sure did the trick tonight.
Then about 6:30 I bundle up and walked down the road a bit, snow plow had been by earlier but the roads were still not great, Some snow on the roads and ice under as well, Sure glad we don;t need to be driving anywhere today. 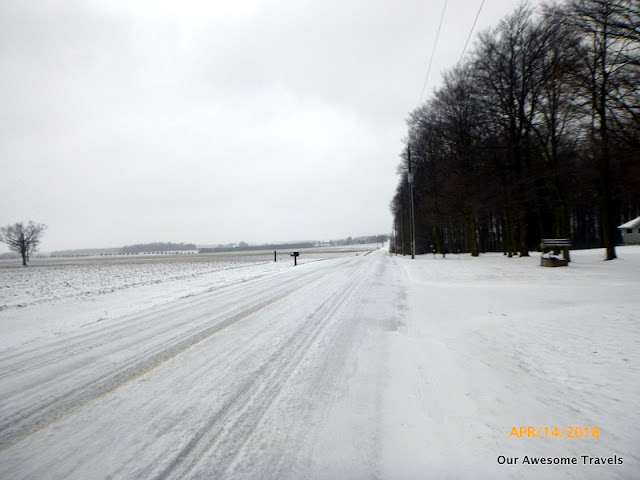 There ya go in wonderful Ontario Canada, spring day (not !) but it is what it is just never know what kinda weather we will get at this time of year. We have bean pretty lucky most years bit guess the cards are not on out favor this year. Soon summer and the heat waves will be upon us yeah !
Thanks for stopping on by today, so nice to have you along.

Want to learn more about Membership camping at Rock Glen Family Resort ?
click this link www.geosuzie.rockglen.com
When we head south Oct 24thCountdown
Where have we been this summer?
Posted by our awesome travels at 6:55 pm