This morning about 7:30 the freezing rain started. As George and had discussed last night, I was staying home. I don't mind driving in snow, but freezing rain is a definite NO. We talked first thing this morning and he was good. He would rather have me stay home than drive in freezing rain.

So, I decided to see what I could do about some re-organizing here at home. The den has been a catch all. I barely had a path to get into it.

About 10:30 I received the following picture. I knew then that he was in his wheelchair and moving around. He had a device around his neck, so that if he ran into trouble, he could push a button and someone would come to him. Needless to say, I was very surprised to see the picture. He took from his phone and texted it to me. Didn't know he could do that. 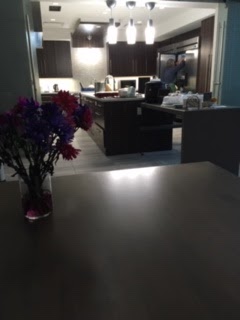 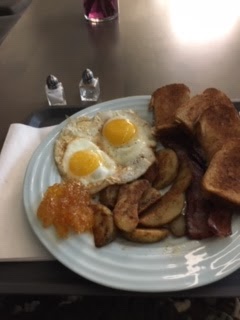 While he was in the kitchen area, he asked if he could get bacon, eggs & home fries. Sure they said and that someone would take it to his room. But he wanted to eat it in the dining room. He ate everything. 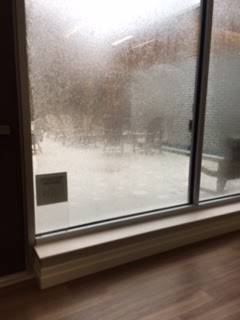 Picture showing the weather outside. 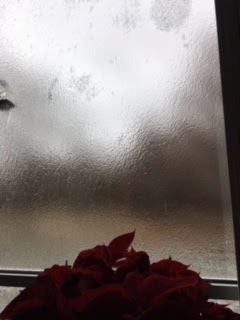 This window in his room was covered in ice. It must have been facing east as that is where the storm was coming from.

I continued to putter around. I actually was able to empty 4 boxes. Just a bit of re-organizing. I had a lot of stuff in the living room area. Boxes every where. Figured out some pictures that eventually I know we will want on the walls.

About 1:20, Gail texted me and wanted to know if I wanted a ride to see George. Their vehicle was cleaned off. Ours was covered in ice and I couldn't get the drives door open. Of course, the drivers door was to the east. About 1/2 hour later, Randy & Gail picked me up. I didn't even let George know we where coming. I made good of that time and put stuff back in the den. Now I can at least see stuff better.

As I was leaving, I got a phone call from daughter #2. She was wondering if I wanted to go see George, but Randy and Gail beat her to it. She also said that her Dad wanted her to pick up stuff from me. I bought him new slippers, better than the ones he had for walking on the floors. I already had everything he wanted packed up and on the way to Randy & Gail's vehicle. She and her boyfriend were just going for a drive. I guess they didn't want to be house bound. 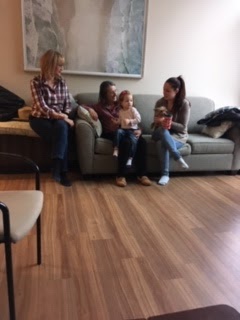 They brought their dog, Stella along with them. I got a dogie fix. 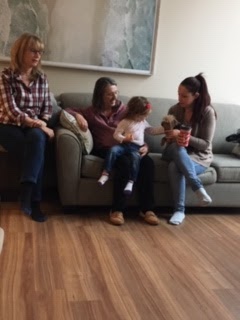 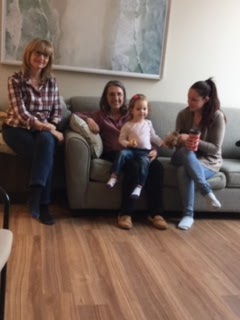 Randy & Gail stayed for a bit and even offered to come back and pick me up and take me home. So nice to have friends that live in the same town. Daughter #2 offered to bring me home. 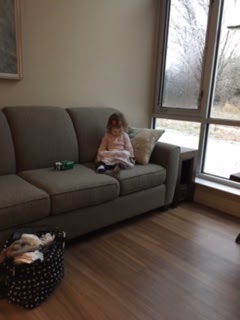 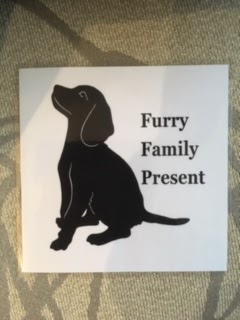 This was posted outside George's room to let people know that a dog was in the room. 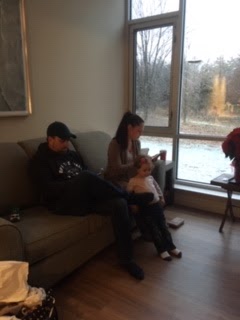 About 5 pm we noticed that George was getting tired. It was great to have family and friends stop by. I'm sure it made his day shorter.

Daughter #2, boyfriend, grand daughter #3 and myself went out for supper. George is going to be so envious that he wasn't there. We went to Annie's Diner and I had fish and chips. What a great place to go. Sorry Geo, that you missed it, but when you get home, we will both go. 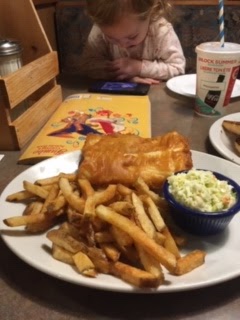 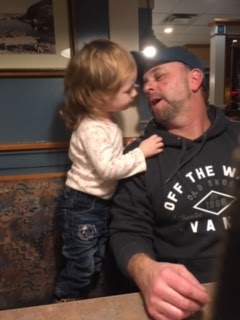 Got a picture of grand daughter #3 kissing her father. So cute she is.

When they dropped me back home, he got the drivers door open. I turned the car on to help get the ice off the car. He made a great suggestion, that being as I have 2 scrapers, I should keep one in the apartment. I had just bought a new one. He couldn't believe the amount of ice on the drivers side of the door. It looked to be almost a 1/4 inch thick. The passenger side had hardly any ice.

After they left, I continued to get ice off the car. I think the roof is the only place I couldn't reach. I'm a little to short for that. Hopefully it will melt soon.

Productive day for me and George again was in his wheel chair for about 3 hours.

So, overall, another great day for us.

Posted by our awesome travels at 8:27 pm