Join us as we travel North America in our Holiday Rambler Vacationer,
since August. 2006
Quite cool all day with very little sunshine so we took the time to do more inside stuff mostly computing, research, travel planning and cooking. I also came across a good article written by two Canadians who have lived in Mexico for a few years and travel extensively every year. Check this out if you are thinking of traveling to Mexico, Mexican Road Safety.  Then a few walkabouts and and a short trip to the store.

Before we retired in 2006, I had lived for 24 years in the small village of Plattsville Ontario (pop. 900), 10 of these years I owned and operated a small restaurant (Jessie's Diner from 1989 to 1999). With this kind of exposure you really get to know a lot of local people and even more know you. Whenever we are at the farm I usually drop by Pettigrew's Garage where I rented some space for my restaurant. The restaurant space is now a store room for the garage but many of the locals stop by the store every morning for a coffee and to chat. One morning a few weeks ago I stopped by the garage and a friend Rick came to tell me that they had just bought a new car in Mississauga from a lady Suzanne. She asked if they knew me and Suzie. Well it turns out that in 1990 she listed my house and sold it as a real estate agent,  we became good friends, then on Nov. 21st 1990 she introduced me to her friend Suzie and the rest is history. Over the years we kinda grew apart, she married and moved away. Rick gave me her card and I sent her an email at her work. She replied and we all made contact again, sent a few emails back and forth, and even a phone call in the afternoon. Now when back at the farm in October we will give her a call and get together, for old times sake and a lot of catching up. Reuniting with old friends is great!

Being an inside kinda day I put on a smoked pork shoulder roast to boil and cook for the afternoon By boiling it twice this cooks it and removes most of the salt that it was cured in. After a few hours of this I removed it from the water then baked it in the oven for 1 hour, to brown it and finish it off. 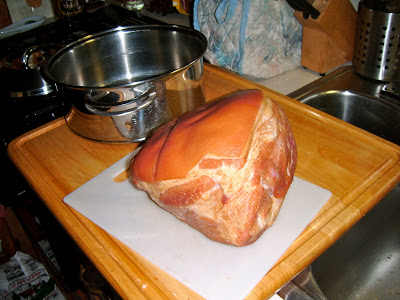 pork roast before cooking
This is a huge roast for the two of us, (it was on sale for $6.00) but was so tasty with some scalloped potatoes/ bacon & cheese and peas on the side. 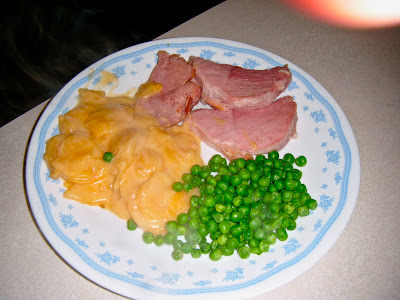 We enjoy leftovers and will have another meal of this, ham for sandwiches, maybe a casserole and a huge ham bone that I will use make a pot of French Canadian Pea soup, so good at this time of year, or anytime for that matter.
After supper was a nice warm evening to read for a bit then a couple of tv shows.

New Years Eve, Stone Island Mexico
Notice the controls for this New Map on the left side, you can zoom into different areas of the map and see where we are or have been.
View Summer 2010 in a larger map
Posted by our awesome travels at 9:22 am