About 2 weeks ago, my brother-in-law delivered the china buffet that was at my brother's. I had emptied the boxes prior to the buffet arriving. Needless to say everything needed to washed. Everything has been boxes since 2006, so a wash was necessary. I used the dish washer for the first time to wash anything that wasn't crystal as I believe crystal needs to be washed by hand. 6 more boxes empty.

Because of the various moves of the boxes, I was very surprised that only 2 sherbets were broke and one chipped glass. There was a box that travelled with us. It had china dishes, crystal wine glasses and good utensils, to be used for a special occasion. What I surprise I had, that everything was intact. Can't believe that for some of the roads we travelled on were very bumpy. 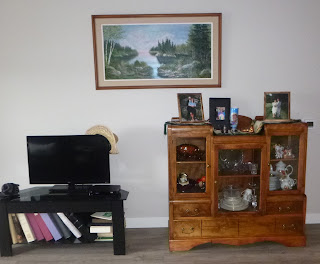 While my brother-in-law was here, he also did a minor repair on my spoon rack. George had given it to me one year for Christmas. It was in pieces as he didn't have time to put it together. So, the spoons needed to be at least washed, except of course for the silver ones. We actually had some Twinkle downstairs in storage which made that job much easier. 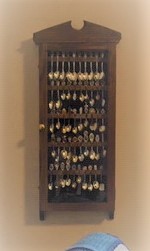 I accomplished some purging in the linen closet. There was no way I needed all the towels, tea towels, dish cloths, wash cloths and rags. The majority went into a bag and I delivered it to a Thrift Store that they can sort through for rags. During my purging of the towels, I then had a lot more storage I could make use of. I was able to move the shelves to what I wanted to put on the shelf. Of course, I moved shelves several times and they might be moved again. Who knows, time will tell. I'm sure you notice that the bottom shelf seems very empty. There is a plan for that space but I need to get something out of the RV or downstairs in storage. It may not make a lot of sense, but I like the idea of having George's tools handy for me to get to. Thank goodness he was thinking when we took things out of the RV. 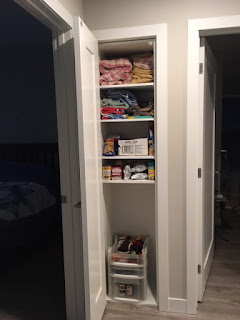 Of course during the process, I re-organised stuff in kitchen and laundry area. When we first moved in, we wanted to move some shelves for stuff to be in it. Because of the me first adjusting the shelves in the linen closet, I was able to figure out how the clips work. The clips have a locking system on them and it was suggested to take the doors off and pull the shelf out. Well for me that is not a good idea as I am really good at taking things apart but I'm challenged when putting it back. So, I was able to move several shelves in the laundry area without taking the doors off.

This past weekend, I went to the RV to get what I was looking for. Found some things I was looking for and some I couldn't find. Mind you, I was able to open all the compartments but one (frozen shut). Maybe what I want is in it or I didn't see what I wanted. While at the RV, I did empty a couple of areas inside the RV to go through another day.

Also, while at the RV and talking with my sister-in-law, she found out that I have done a couple of meals in the slow cooker. She suggested we go to the New Hamburg Thrift Store and look for a small one. I was in luck and found a little one for a really good price. Found couple of more picture frames that I will use for another project. While at her house, she had a couple of things that she was purging and I could use. So another great find.

The following project has taken a while to accomplish. I wanted to create an area that shows the merging of two families. The first row of pictures are from our wedding and the balance pictures of George's 70th birthday party. 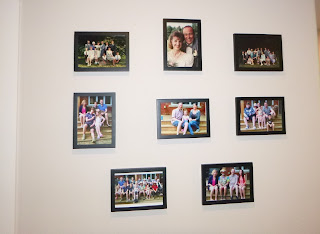 During the past couple of days, I have copied some of George's recipes to a word document. Not all the recipes on the blog will I use. I have accumulated 30 plus pages of recipes. They are now printed and in a binder that is 5 1/2 by 8". I much prefer a book type selection of recipes instead of always checking the internet. Of course, any recipe I find on the internet will go into my binder.

As you can see, I have been busy with several projects, with more in mind. I have managed to keep busy. I have started to get to know some people in the various buildings. I've been to coffee time twice, worked on a puzzle with someone I have met and yesterday there was a wine tasting from Bell's Winery here in Stratford. They will make wine from kits to suit what you like. It was very interesting but the red wine they brought, I definitely didn't like.

Thank you all who commented on Daughter #2 tribute to her father. It took her a while to compose it. She had asked her brother to read it at the funeral, but he declined as he would need a box of Kleenex's. I tried to warn you about the Kleenex's as every time I read it, I need the box.

I am doing Awesome and taking care of myself as George would wish. He would not want me living in the past. He would want me to go forward with my life without him, even though he is in my thoughts every day.

Want to learn more about Membership camping at Rock Glen Family Resort ? click this link www.geosuzie.rockglen.com to book a tour
Posted by our awesome travels at 5:20 pm