Went to Paris for lunch and a couple hockey games.

Where are we today ?
New Hamburg Ontario Canada
Yep we did, went to Paris (Ontario) this morning. Grandson number 4 had a Hockey Game, then we went for lunch with the family.
It was a great game and he scored another goal they defeated Paris Wolfpak 3 to 2. This is the Paris Arena very nice 2 ice pads. These new arenas are nice but full netting mesh to protect the spectators from flying hockey pucks, but not great for pictures. 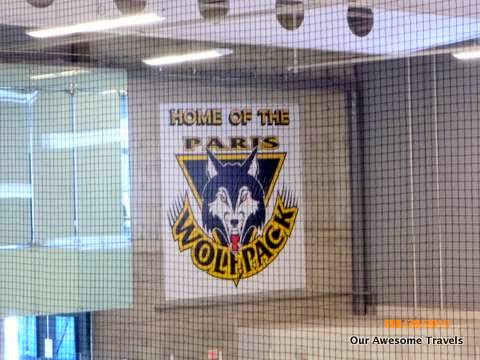 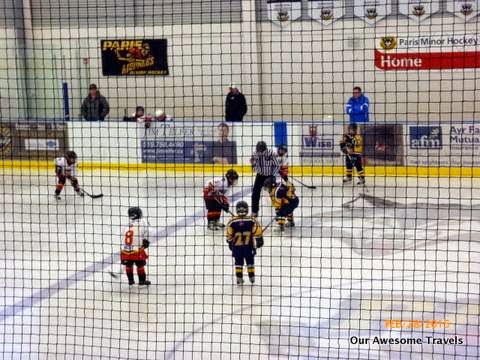 On the other ice pad they were practicing "sledge hockey" first time we have ever seen this. It allows players who have a physical disability to play hockey.

After the winning game we had 3 hours until the next one so we headed off to the New Paris Country Grill for a very tasty brunch. Very good home made food at reasonable prices, I had an excellent Rueben and fries, Suzie a western omelette, Daughter  #2 a salad, and SIL a monstrous very filling breakfast skillet. The boys each had soup and some fries.
After a nice family brunch we still had time so wandered over to Brantford and stopped at Staples for some ink cartridges for our new printer. Checked out a few things then we moseyed along down the country roads to St. George for a 3:20pm game.
Grandson #1was playing against the St. George Generals, a smaller older arena but at least this one was heated, seems the new arenas there is no heating for the spectators. 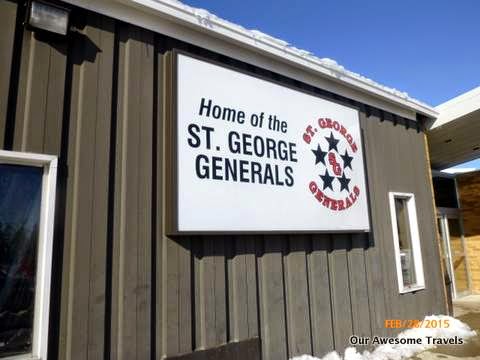 After the game we hung around for a bit, chatted and congratulate him on the great game then headed on to our temporary home in New Hamburg in time to catch a nice sunset off the upper deck. 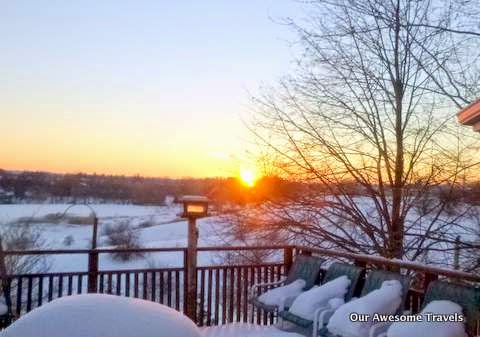 Now after our huge brunch a very light supper, we split a small bowl of popcorn and an apple.
That was a fun day with family and and nice sunny weather with dry roads.
Thanks for taking a peek again hope ya'll had a great Saturday too.
Check out the interactive map below to see where we have been this past Winter.
Posted by our awesome travels at 7:41 pm