Moving on down the road another hour, just like to keep on going.

Where are we today ?
Aurora Ontario
Friday morning and time to hit the road this morning. Had an awesome visit with Sis and brother in-law. Puttering around, step sister and Karen and her hubby Harry dropped in to. The map below shows where we drove on Wednesday and then again today each time just over and hour, nice days drive.
So after coffees and stuff, head on out to Aurora. Gonna visit daughter Kim, son-in law Brian and three grandchildren here.

Nice country drive thru a few small towns, Uxbridge being one of them.

But because of where Kim and Brian live we cannot park our coach and closest campground over 20 miles away. We are lucky to have a solution. I have a cousin Marie and her husband Frank only live a few minutes away and we can park in their driveway. And the bonus is we can visit with them as well while we are in the area.
We settled into their kitchen for a bit, in the city here and no breeze so with humidity was well over 100f. We had a little light afternoon snack. Chat and more chat , its been a couple years ya know. 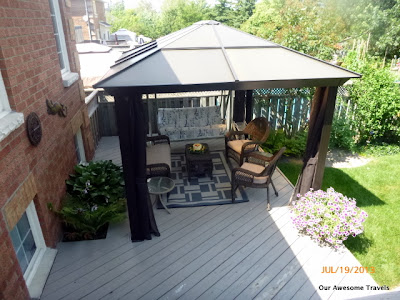 We had some strong winds and thundershowers for a bit and temperatures sure dropped in a hurry. Then we moved outside to their lower deck, nice out here now.
Then a little later we are working on an Italian style meal, start with the anitpasta. So tasty and flavourful.
Then as if we did not have enough a little nibble of the chelsea bun that we brought. Now did we have fun with about 5 hours of conversation and a very nice leisurely meal, tasty food and great company.
Ok enough for today thanks for stopping by and see y'all later.
Night night.....

Posted by George, a.k.a. "The Weber "Q" Man of Blogland" according to Rick Doyle.
Check out the map below to see where we have been this summer
View Summer 2013 in a larger map
Posted by our awesome travels at 10:09 pm