Twist and Shout, The British Invasion

Where are we today ?
Rock Glen Resort Arkona Ontario

This morning was quite cool at 5 am the high 40'sf so turned our furnace on for a few minutes to take the chill off. Then the sun came out and warmed things up perfectly. So much so that by 9 o'clock I was in the mood to wash our coach.
After a pot of coffee and few walkabouts of course. Sun shining and gonna be an awesome day. 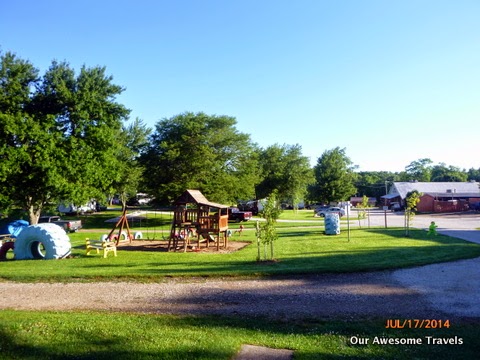 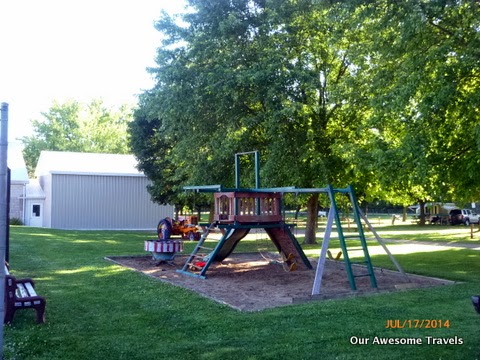 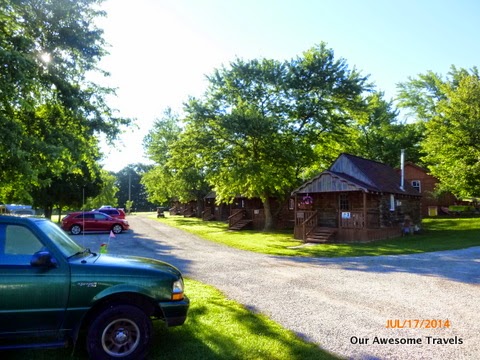 Got things ready and my wash permit then set to work. Not much more than an hour later and looks pretty good, still nice and shinny. Maybe wax the coach again next month. We have all morning before the theatre, so lets make use of it.
Shortly after 1 pm we headed off to the Huron County Playhouse in Grand Bend to see some live Theatre. And what an afternoon we had!
Huron County Playhouse in Grand Bend

Twist and Shout The British are coming

"The British are coming! The British are coming!  Nine years after becoming the most successful production in the history of the Huron Country Playhouse, the Brits are finally back.
In the 1960s, four mop tops called the Beatles crossed the pond and landed in North America, forever changing the landscape of modern music.  The revolution that followed is celebrated in this incredible musical revue featuring classic songs by The Beatles, Gerry & The Pacemakers, The Hollies, The Kinks, The Rolling Stones, The Searchers, Dave Clark Five, Herman’s Hermits, Dusty Springfield . Petula Clark , including a hilarious and accurate Ed Sullivan show and much more.
This is imaginative, infectious, and immensely irresistible piece of 60s nostalgia had people bopping in the aisles and singing our way out of the theatre."

The video below is a behind the scenes look at rehearsals.

I was not a huge fan of a lot of these bands at the time. But after only a few minutes here we sure got into the mood, bringing back memories of our much younger days. They even had some tv monitors at the side playing TV commercials and videos from the 60's. Even the MC did some really good Ed Sullivan impersonations, introducing the Beattles to North America.
Right from the very beginning it was up tempo and nonstop. Great dancers and amazing singers, I think some were actually better than some of the originals. From 2pm until 4:45 with a 20 minute intermission the afternoon just flew by. First day of the production here in Grand Bend to an almost full house. One show near the end was the Rolling Stones and Mick Jagger was amazing! And we managed to snag two awesome seats.
Of course no pictures allowed but I took a couple before they announced that. 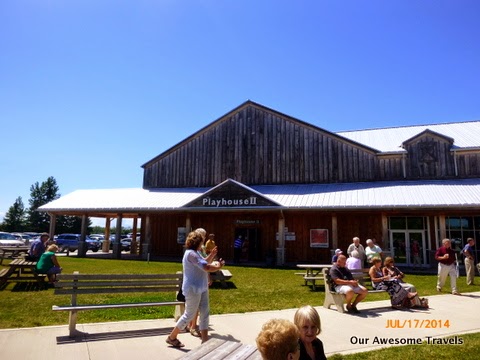 Back at the campground we ran into friends Phil and Judy we have not see for a year and a half in Frost Proof Florida where they have a seasonal site. They used to have a season site here for many years. So nice to see them again and get caught up,where does the time go?
Once they headed out I threw together a nice green salad and turkey breast (from last nights BBQ) for a very filling supper.
Well we had an real awesome day. Wash the coach perfect summer weather, an amazing show at the theatre and a nice visit from friends we have not seen for a while. Does it get much better? Think not.

Glad you could drop by too, and if you have a chance to see this excellent production it is very a worthwhile venue. Love the small theatres when we have a chance, and something sparks our interest.

Posted by George, a.k.a. "The Weber "Q" Man of Blogland" according to Rick Doyle.
Check out the map below to see where we have been this Summer.
View Summer 2014 in a larger map
Posted by our awesome travels at 8:40 pm