Good deals we really like, and a whale rescue.

Where are we today ?
Plattsville Ontario
On yesterday's posting I mentioned that I picked up a Laser Digital Thermometer mainly for checking the temperature of our tires and brakes while travelling. It works amazing ! We went to Canadian Tire in Stratford and picked one up for $49.99 regular $99.00, figured that was a pretty good deal. But then today I saw the Canadian Tire  Flyer and they have them on sale for Father's Day, until June 8th. For only $19.99 wow thats a deal. So off the Kitchener this morning for a few groceries and stopped into a store and mentioned it. No problem. Just showed the receipt and got a refund of $33.90 in cash. Now that is an awesome deal considering I paid for it with Canadian Tire money.  So if you live in Canada and want one get out there no later than Sunday and pick it up.
Got an update email from Debra and John (formerly from Ontario Canada) who now live on Isla de la Piedra (Stone Island) near Mazatalan Mexico. We met them In 2009-10 when we spent two months there. While walking the beach they noticed this huge 40 foot Whale that was beached. A couple phone calls and many people arrived attempting to push this 15 ton whale back out to sea. To no avail. Eventually the coast guard was called in and along with two banana boats were able finally tow it back out to sea, hopefully it will survive. 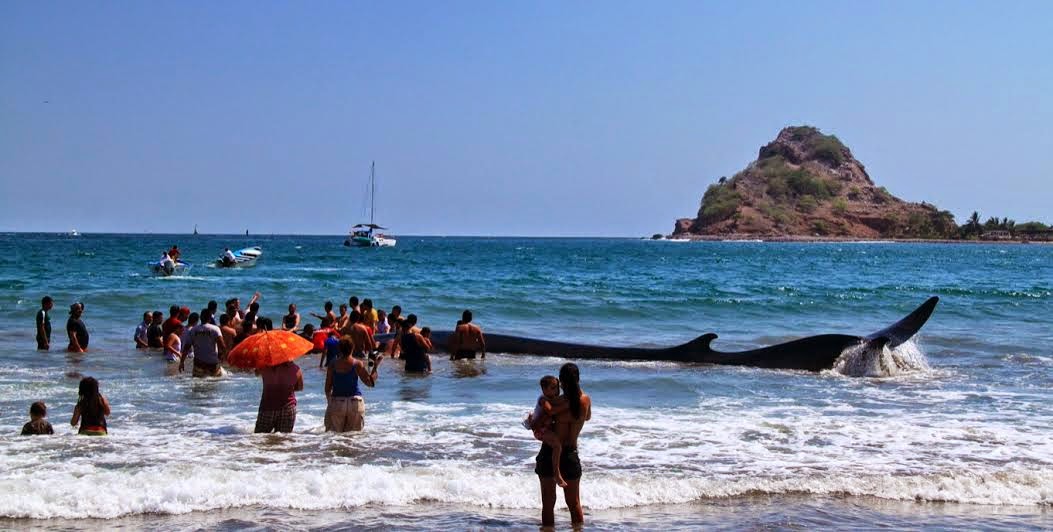 Then plan was to whip up a pasta salad, Leah's favorite and one of ours too. Then after a quick bite for lunch Suzie off to New Hamburg.
If your read an earlier posting we had problems with our coach when we arrived last Friday. Brake issues, generator not starting, coach needed lube oil and filter, well got that all taken care of on Tuesday at Pettigrews garage in Plattsville here. The other problem was our electric entrance step was broken. So called Sicards Rv in Hamilton and talked to the friendly parts manager Jeff. Ordered the replacement part we needed. It came in there yesterday and overnight courier was delivered to Plattsville this morning. So while Suzie was gone I set to work to install it. Only about a 20 minute job and now works as good as new again. I replaced that same part once already 7 years ago. So the install was much easier this time. I even got a good discount. a usual from them, making it very reasonable.
We even got to enjoy a nice warm sunny afternoon, running the dogs and reading our books. Until time for supper. Giving the Weber Q a rest tonight I used the rest of our BBQ'd Turkey breast from last night to accent a very tasty salad I threw together
That was another fun day here at camp awesome. Sunshine and warm temps. Hope you had a great day too.
Thanks for stopping in for a read. Tomorrow back to Rock Glen resort about 90 minutes down the road for about a week.

Posted by George, a.k.a. "The Weber "Q" Man of Blogland" according to Rick Doyle.
Check out the map below to see where we have been this Spring
View Summer 2014 in a larger map
Posted by our awesome travels at 8:40 pm